If I Can Dream

As some of you might have read in the newspaper this morning, Simon Fuller is apparently back in the game with a new TV show. Also this time around it features predominately talented, young, beautiful people with a big dream. But that is where the similarities end.

Except for in the launch phase, If I Can Dream will not air on television. Instead, you will be able to follow the cast 24/7 through the official homepage, the blogs kept by the cast, Twitter, Facebook, Myspace and other social networks. As you follow the cast (who are all living together in a big house with cameras in every room – anyone recognizes that idea?) you will be encouraged to communicate with them through social media and to influence their decisions. No one will be voted out, instead people will move on from the house when they have “made it”. Then a new participant will be voted in from a pool of hopeful talents who have uploaded a video of themselves. 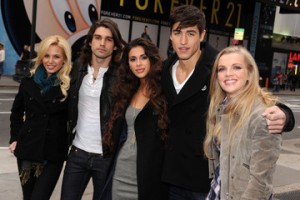 The format of the shows sounds very interesting and it definitely bears potential for gaining loyal followers. But there is one minor problematic issue with the show: it shares its name with an Elvis Presley song. Try searching for the show on Youtube and you will get my point.

The show was launched yesterday. Will you follow it?

Studying International Business, International Relations and Marketing at Macquarie University in Sydney, Australia.
View all posts by sofiejek →
This entry was posted in Media, Social Media and tagged entertainment, If I Can Dream, Social Media. Bookmark the permalink.

3 Responses to If I Can Dream